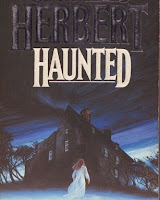 Is the Herbert Grand Hotel haunted?  Are there any special rooms that have “stories” about them?  Do we ever hear sounds in the middle of the night?  Do we know that the lobby and the corridors remind people of “The Shining”?  Has anyone ever picked up the receiver of one of the antique wall phones and heard voices at the other end?  Has anything “strange” ever happened here?

For the last three years, we have routinely answered “No” to all of the above, except for the questions about the resemblance to the hotel in “The Shining.”  We had fun with that when Rob showed the movie at our 2009 Halloween Party. The image of Jack Nicholson rushing toward us on a screen 102 inches wide and announcing “Here’s Johnny!” was scary.
Still, the questions have continued.  We decided to look for answers.  Two teams from Maine Ghost Hunters came to the Herbert Grand Hotel for two days to investigate the rooms in which guests have reported seeing or feeling something “strange.”  They brought with them an array of visual and audio recording equipment to capture images and sounds throughout the building.
Is the Herbert Grand Hotel haunted?  We will wait for the investigation results.  The hotel does have an odd history. Herbert Wing had the hotel built in 1918 and chose to close it in 1929, but we don’t why he did so.  Maids remained on staff and cleaned the rooms regularly, but guests were not welcomed.  Mr. Wing sold the hotel in 1956 and died two weeks later, on Christmas Eve.  Much has occurred since then.  We are eager to learn what the MGH investigation will reveal, after the data is analyzed.
Posted by Herbert Grand Hotel Innkeeper at 11:24 AM